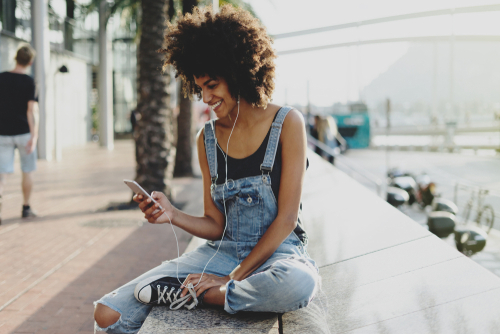 Summer doesn’t officially start until June. Still, there’s no reason why we can’t be looking forward to sunnier days to help keep us warm in these colder months. One of the best ways to get your summer vibe on is through music. Dance and sing your heart out to a playlist dedicated to the hottest days of the year. Here’s a list of some of our favorite summer-inspired songs to get you through the chill of winter.

With Gloria Estefan leading the band, this has become one of the singer’s signature songs. How do you do the conga exactly? We’re not entirely sure, but we can help but move to this Latin-inspired 80s hit.

Lounge meets calypso in this 1987 tune. If you’re feeling cold, cold, cold, this jam is bound to turn it around for you. It’s sung by David Johansen, who was also part of the 1970s rock band, The New York Dolls.

3. Heatwave by Martha And the Vandellas

This Motown hit was released for the first time in 1963.  Martha And the Vandellas sing about a heatwave of love, but in the winter months, we’ll have to settle for our furnace!

Nelly has produced some iconic rap hits over the years, but we have a soft spot for this jam when it’s cold outside. Maybe it’s the hook from Chuck Brown’s “Bustin’ Loose.” Maybe it’s the catchy chorus. Either way, we can feel the temperature rising.

One year after The Fresh Prince of Bel-Air premiered on TV, Will Smith and his musical partner Jazzy Jeff put out their 4th studio album. Without it, we wouldn’t have one of our favorite summer anthems. Can you dig it?

While recovering from surgery, this acoustic songstress wanted to write a tune that looks on the bright side of life. We can feel her hopeful warmth spilling out of every bar of this song.

7. Sun is Shining – Bob Marley and the Wailers

What is it about Reggae music that is so transportive? Just a few notes into this classic, and it’s easy to feel like you’re on a sunny beach. Once a less popular track—Marley only performed it live twice—it has now become a fan favorite.

8. In the Summertime – Mungo Jerry

This 70s brit rock band knew a little something about the spirit of summer. We can’t listen to this classic without thinking about grilling out, fireflies, and shorts weather. Bring on the heat!

Name a more iconic summer singalong song. We’ll wait. Whether you’re a Grease fan or not, this is one of those upbeat tunes you can’t help but dance around to. Pro tip: it’s even more fun with friends!

Katy Perry has us all wishing we all could be California girls, especially when it’s snowing outside. This pop hit brings you the west coast sunshine when you need it the most.

Can you believe this trip-hop ‘90s song almost wasn’t released? We’re so glad it made it onto this Canadian band’s record. Otherwise, we’d be missing out on its uplifting summer beat.

If anyone is keeping things hot right now, it’s rapper Megan Thee Stallion. This song is such a banger we might even be able to make it a Hot Girl Winter while we wait for warmer days.

You have Ric Ocasek to thank for this summery tune. A prominent member of The Cars, he also produced this album for Weezer. The band wanted to cut it, but good old Rick knew we’d need this jam to get us through the freeze of winter.

Originally released as a b-side, this song has become synonymous with beach and surfer culture. While you may not be able to catch waves quite yet, there are no rules against couch surfing.

15. Hot Fun in the Summertime – Sly and the Family Stone

Right before the legendary Woodstock, Sly and the Family Stone put out this breezy song about the hottest days of the year. Upbeat with hints of soul and funk, it will make you want to boogie down.

16. Walking on Sunshine – Katrina and the Waves

You know those winter days you just don’t want to get out of bed? This is the summer song that will pull you through. Synonymous with good, sunny vibes, it was first written as a ballad before it got an upbeat makeover.

Hands down, this was the summer song of 2020. Still, there’s no reason why every day can’t be a “Watermelon Sugar” day. We know Harry Styles would approve.

“It was the summer of ’92, and I was in a hotel room, really in a state of euphoria.” This was Ice Cube’s state of mind when we wrote this summertime song. Feeling at the top of his game, he gave us this warm melody to see us through the cold.

Thanks to being featured in the 80s film Karate Kid, this moody summer song reached a wide audience and became a smash hit. Listening to it, we can almost hear the concrete sizzle with the heat of hotter days.

You don’t have to be a Swiftie to enjoy this pop tune. Inspired by those steamy feelings that come with summer romance, it’s already earned a permanent spot on our summer song playlist.

Ready to heat things up? If these songs aren’t enough to heat your home, you can count on Welter Heating to do the trick. Schedule a $99 furnace check up to keep your home dance floor hot even when the music stops.