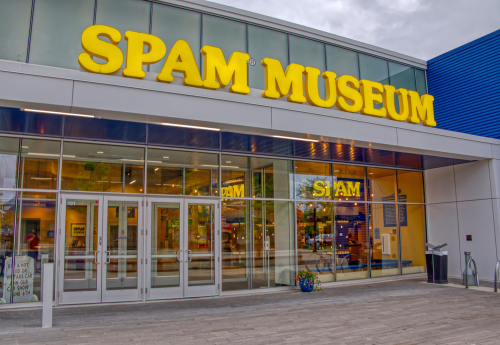 Summers don’t last very long in Minnesota. If you don’t have anything to do, make the most of a summer day and take a little adventure to check out some of these out-of-the-way treasures.  From art to science to… processed meat products… there is a lot more to do outside the Twin Cities than you may realize. Igo

In 1898, a guy named Olof Öhman found a mysterious artifact about 15 miles outside Alexandria. It’s called the Kensington Runestone, and Olof claimed it was an authentic Viking runestone from 1362 (it even says 1362 right on it!). Is it real? Is it a hoax? The answer is: inconclusive. The Runestone Museum has the stone on display, so maybe you can solve the mystery!

The museum isn’t limited to this one artifact. Other artifacts from Middle Age Nordic explorers are also on display, as well as artifacts from indigenous civilizations and exhibits about Minnesota’s natural history.

The twine ball has everything you want from a roadside attraction: it’s big and it’s there. Head west on Highway 12 for an hour and a half and you’ll find yourself in Darwin, home to the biggest ball of twine wound by one person. This was the first largest twine ball, and yes, others have made bigger ones, but this is the only twine ball with a single winder.

For those of us who drive to Wisconsin or Illinois along 94, the problem with the Norske Nook is that it’s just too close to the Twin Cities. It’s not far enough out of town to justify stopping for lunch on our way there. It’s too close to town to justify stopping for lunch on our way home. But the rumors about the pie at this legendary diner are true:  it’s the best. You can also get all the lefse your heart desires, and you can eat it on a very charming patio. Make a day of it to drive out there for lunch and you’ll still be home well before dinner.

At just about an hour away, this is the closest of the day trips on this list. And it’s a good thing, because you’ll want all the time you can get to stand next to the biggest boot in the world. Located inside the Red Wing Shoe Store and Museum, the boot’s size is 638 ½ D. The D means it’s a standard width. This boot is over 20 feet tall!

The museum has a tour of Red Wing Boots from various eras, as well as a steel beam from a skyscraper you can walk on. And the best part: the outlet store, where you can get Minnesota’s own boots and shoes at 30%-70% off.

If you haven’t been to the Spam Museum yet, that’s not very surprising. Austin, MN isn’t really on the way to anywhere you’d want to go (except Decorah, Waterloo, Cedar Rapids, Iowa City, Davenport, or St. Louis), and as they say: out of sight, out of mind.

But it’s time to dedicate a spare Saturday to see this culturally significant landmark. Minnesota’s outsized role in food history is usually thought of as grain-based. But Hormel has been putting spiced ham into blue cans since 1937. In fact, Hormell ended up being a major contributor of meat to the Allied Army in World War II. There’s a lot more to those little meat cubes than you may realize!

After your long day out visiting a museum or eating some road trip-worthy pie, you’ll want to make sure your home is nice and comfortable. And that means making sure your air conditioner is in proper working condition. You can contact us today to schedule an AC maintenance appointment.